The Road to WWII, Bubble Gum Cards, and the “Horrors of War”

The Road to WWII, Bubble Gum Cards, and the “Horrors of War”

Essential Question: How can everyday items help us understand the past?

In the early 1930s, despite the harsh economic realities of the Great Depression, a Philadelphia bubble gum entrepreneur Warren Bowman was the first person to build gum factories in Japan. A physically imposing person at six foot three and weighing 220 pounds, Bowman was originally a used-car salesperson, who grabbed unsuspecting customers right off the street. Gum giant William Wrigley was his hero and soon Bowman managed to convince a bank to loan him several dollars to start his own business. He started with some old machines, barrels of sugar and glucose, and established the Bowman Chewing Gum Company, or GUM, Inc. His business quickly took off as he produced bubble gum brands that outsold many of his competitors and began introducing chewing gum cards into the packets he sold and distributed to local grocery stores.

In 1937, Bowman heard a news broadcast on his radio about the raging war in China, while also reading about the Japanese invasion of the Asian mainland in the newspaper. Although he was aware of his financial enterprise in Japan, an idea struck him. He could make collector cards showing scenes from the handful of wars going on in China, Spain, and Ethiopia and use them to sell his gum. Bowman figured that children would be attracted to the cards showing battle scenes, but he was also determined to use the cards to alert impressionable minds about the importance of peace rather than the sensationalism of war. He called upon his advertising executive George Moll, a Sunday school teacher, to begin working on his project.

What soon followed was a 240 card series picturing battle scenes and attacks on civilian populations. The “Horrors of War” series was a financial success. Each piece of gum, which sold for one cent, came with a picture card depicting the brutality of war—mostly atrocities committed by the Japanese military. The series, which finally produced 288 cards, grossed over 100 million dollars. Bowman insisted that he was trying to teach peace by exposing the horrors of war—each GUM, Inc. card had printed at the bottom the inscription “To know the HORRORS OF WAR is to want PEACE”—and claimed to have received the full support of the peace organization World Peaceways. Given the strong isolationist sentiment in America and the desire for neutrality Bowman’s rationale for producing the “Horrors of War” gum cards lent credence to the general belief that the ideal of peace carried substantial weight with the public. Even President Franklin D. Roosevelt used the cards as a way to explain the terrors of war to the American people.

However, Bowman’s collector cards did not meet the approval of teachers and parents who considered them too graphic and gruesome in detail. In the United States, many parents tried to prevent their children from purchasing the one-cent gum, or confiscated the cards. Japanese-Americans were also offended by the series and feared a nativist backlash reminiscent of the late 1800s and early 1900s. In Japan, moreover, the cards became a bone of diplomatic contention because some of the atrocities committed by the Japanese army in Manchuria and China were highlighted in the cards. In 1938, Japanese Embassy officials in Washington, D.C., presented a formal protest to the American State Department, insisting that Bowman withdraw his cards and gum from sale. The State Department refused to bow to Japanese protests, especially in light of the fact that the Japanese had sunk a U.S. gunboat, The Panay, on the Yangtze River, one of the events depicted in the card series. The Japanese then declared Bowman “an enemy of Japan” and ordered him to close his gum factories in their country.

Regardless of whether Bowman’s intentions were purely financial or altruistic, the “Horrors of War” series remains one of the most popular items for collectors and card buffs today.  As an educational tool, the cards can be examined on three different levels and lessons plans and DBQs can be created as methods of instruction. First, in terms of warfare these cards can highlight the development and modernization of weaponry making the destructiveness of war far more horrifying than previously imagined. Students will be able to identify the new methods of weaponry and their impact on physical structures and humankind. Comparisons can be made between weapons in previous wars and those developed since World War I. Second, in terms of peace, students will be able to see from these cards the enormity of destructiveness related to warfare as well as the many innocent civilians victimized by advanced armies. Themes related to peace can be ascertained in the backdrop of isolationist sentiment and larger questions raised with respect to diplomacy and statecraft. The notion of imperial conquest using force can be readily identified in the card series with respect to China and Ethiopia. Questions can be asked regarding Spain’s Civil War and its effect on the populace. Third, and last, the stories on the back of the cards can be used as a means of literary instruction. Apart from the visual imagery depicted in the scenes, is it possible for students to read the captions and learn about events taking place at that time? What historical lessons are being derived from the cards’ narratives and do they advance one’s understanding of the consequences and horrors of war? How did the isolationist sentiment of this period influence Bowman’s decision to produce this series of bubble gum cards? Based on reading the captions would students be more inclined to praise peace and condemn conquest?

Below are ten representative cards with the illustration and story for consideration. A brief excerpt of each collector card is provided along with questions that can be used in a document-based format.

The Great Depression, a time of terrible poverty and hardship, provided a springboard for leaders like Hitler, Franco, and the Japanese military to gain power in their respective countries. Each of these leaders and generals promised economic and social hope to those who had been hurt by the depression, but all of these plans came at a dramatic price. These individuals led campaigns that would drive the world into its second great conflict, World War II. In 1938, the war was still far off in the minds of many Americans, but GUM, inc. and owner/founder Warren Bowman saw the atrocities being committed by Spain, Germany, and Japan, and felt that he could make a pitch for peace. Utilizing the popular bubble gum cards of the era, he believed that “To know the HORRORS of WAR is to want PEACE”, as is stated on every card. In the following DBQ, answer the questions at the end of each card, and always keep in the back of your mind the theme presented at the bottom of each card. 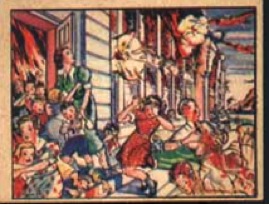 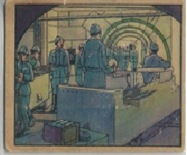 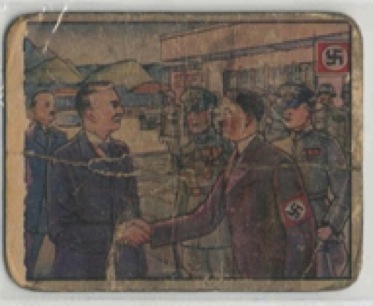 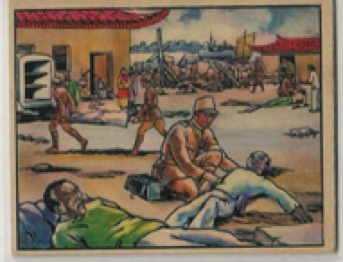 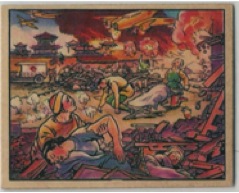 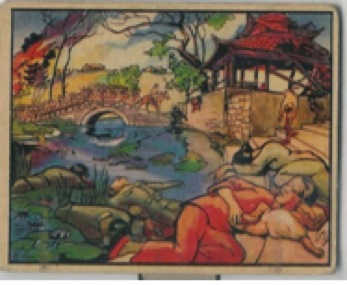 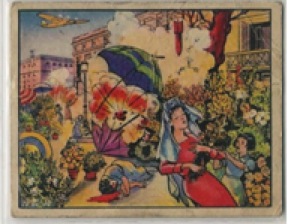 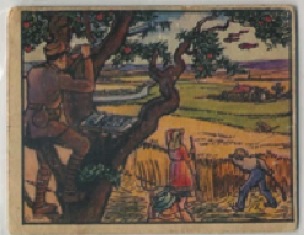