Philippines After the Spanish-American War

The Philippines After the Spanish American War 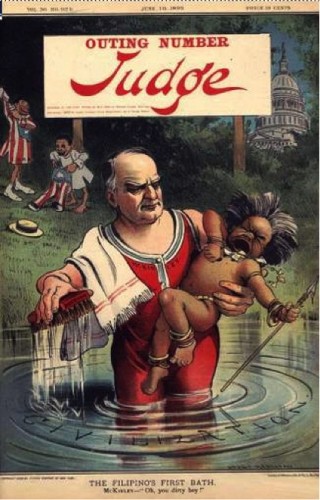 Project the cover of Judge Magazine (). If the students are unable to read the text, tell them the date at the top is June 1899. The caption reads “The Filipino’s First Bath: McKinley --‘Oh you dirty boy!’”

Ask the students to describe what they see – who is the man in the bathing suit? Who is he bathing? What does the water say? What does this represent? Who are the 2 people in background? What is the artist’s purpose in drawing this? Etc. Make sure to explain the racial and gender inferences included in the cartoon since racialization, genderization, and infantilization were key factors in how the United States handled the Filipinos.  (10 minutes)

After students have shared some of their cartoons, as a concluding activity have them answer the remaining questions on the worksheet. (15 minutes)

Library of Congress – The Spanish American War in Motion Pictures

The Birth of the American Empire as Seen Through Political Cartoons

Cartoons of the Spanish American War

In Our Image: America's Empire in the Philippines by Stanley Karnow

Journey of 100 Years: Reflections on the Centennial of Philippine Independence by Cecilia Brainard and Edmundo Litton

A War of Frontier and Empire: The Philippine-American War, 1899-1902 by David Silbey

Benevolent Assimilation: The American Conquest of the Philippines, 1899-1903 by Stuart Creighton Miller

Policing America's Empire: The United States, the Philippines, and the Rise of the Surveillance State by Alfred W. McCoy

The Blood of Government: Race, Empire, the United States, and the Philippines by Paul Kramer

Soldiers in the Sun: An Adventure in Imperialism by William Thaddeus Sexton